During this week, I've been researching duels for a plot line running through my WIP. I found some very interesting tidbits I thought I'd share.

While most duels were fought with sword or gun, some were far more unconventional.

On the 4th of September, 1843, in the commune of Maisonfort, France, two young men named Lenfant and Melfant, quarreled while playing at billiards, and agreed, at last, to settle their disturbance by a duel with billiard balls; after which they drew lots to see which one should get the red ball and throw first. Melfant won the red ball and the first throw, and the two at once took their positions in a garden at a measured distance of twelve paces from each other. Melfant, when the signal was given to throw, made several motions, saying to his adversary, “I am going to kill you at the first throw.” And then he hurled the ivory sphere with deadly aim and effect, for it struck Lenfant in the middle of the forehead and he dropped dead without uttering a word. The survivor was arrested and tried for willful murder, and convicted of manslaughter.
—The Field of Honor: Being A Complete and Comprehensive History of Dueling In All Countries; Including the Judicial Duel of Europe, the Private Duel of the Civilized World, and Specific Descriptions of All The Noted Hostile Meetings in Europe and America by Benjamin C. Truman.

And let's not forget the hot air balloons. The staple for any duelist.
Two Frenchmen chose to fight from balloons over Paris because they believed they had ‘elevated minds’. Monsieur de Grandpré and Monsieur de Pique quarrelled over a famous opera dancer called Mademoiselle Tirevit, who was mistress of one and lover of the other. So,at 9 a.m. on May 3 1808, watched by a huge crowd, the two Parisians climbed into their aircraft near the Tuileries and rose gently up into the morning air. At about 2,000 ft, when the balloons were about 80 yards apart, de Pique fired his crude blunderbuss and missed. De Grandpréaimed his more effectively. De Pique’s balloon collapsed, the basket tipped, and he and his second fell headfirst to their deaths on the rooftops below. De Grandpré and his second, however, drifted happily away in the light north-westerly breeze before landing safely 20 miles away.

--The Last Duel: A True Story of Death and Honour By James Landale


Dueling was not always this conventional. One man actually threw off some surprising constraints when he dueled. 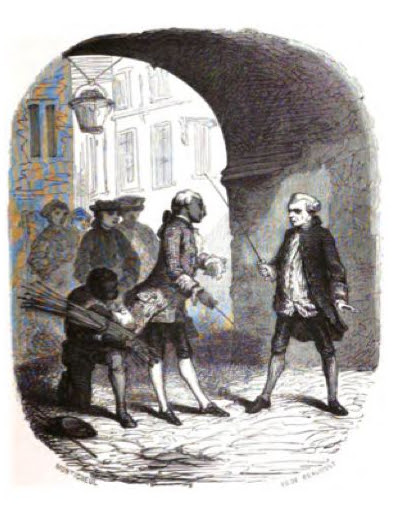 A Member of Parliament once duelled in the nude. Humphrey Howarth, the MP for Evesham, was attending the races at Brighton in 1806 and dined one night at the Castle Inn. There he fell into discussion with the Earl of Barrymore, an Irish peer. Discussion turned into quarrel and they arranged to meet on the race course early next morning. Both men were rogues, and much given to taking the piss. But even Barrymore was astonished as his opponent took his clothes off and presented himself on the duelling ground armed solely with pistol and pants. The seconds and other witnesses burst out laughing, not least because Howarth was by then a fat old man. But Howarth was in earnest. He had spent much of his earlier life as an army surgeon for the East India Company. He knew gunshot wounds were often infected by the dirty clothing that preceded a bullet into flesh. In the end, however, his precaution was redundant. Both he and his opponent missed their targets  and  resolved their dispute without bloodshed.

--The Last Duel: A True Story of Death and Honour By James Landale


There you have it. Truth really is stranger than fiction.
Robin