On Saturdays I'll spotlight another historical romance author. It might be an excerpt, an interview, or anything else like that.
Today we have Carolyn Jewel, and author I've been reading for some time now, and just had the pleasure of meeting. (A serious fan girl moment. lol)

When did you decide you wanted to be a writer?


I always wanted to be a writer. At least, I can't recall a time when I didn't. It took me a while to move from "want to be" to "actually writing" though. Since that's not a very interesting answer, I'll say I was 26 when it finally occurred to me that if I wanted to be a writer, perhaps I ought to try to write something.

Someone once gave me a hard time for saying "writers write" because it seems so dang obvious. And it is. But the truth is the people who never make that step between "want to write" and "actually writing" far outnumber the people who do.

That's so true. It took me some time to get from writing for myself to writing for publication. I think it's one of the most difficult steps for a writer to take. So, when you'd finally chosen to write, how long did it take you to publish your first novel?

My first publication story is at once atypical and proof that it takes luck and timing. At 26, as noted, I started writing my first novel.  A year later, all I was changing was the punctuation so I figured I must be done. I duly got myself a Writer's Marketplace, made a list of likely agents and editors, ranked it, and decided I could only take two rejections at once. I mailed out two queries.  I am a wee bit dyslexic and, as I learned 6 months later, I reversed two numbers in the address on one of them so it never got there. However, two weeks after I mailed the queries, I came home to a message on my answering machine to the effect that this woman thought she had an offer on my book, would I please call her?

Well. OK! It turned out that someone who wrote for a Romance line at St. Martin's Press had not turned in her novel on time and they had a gap that needed to be filled ASAP. And guess whose query letter hit this agent's desk just as she was given this news? Yup. My book was good (so I like to think) and my query crossed the right person's desk at the right time. My third book, by the way, was substantially harder to sell than books 1 and 2. I didn't have a Sophomore Slump. I had a Junior Jinx. Heh. It was several years before I sold my 3rd book.


Lol. A Junior Jinx, I like that. And what an awesome way to make a first sale! That really is the dream for most aspiring writers.
Now that we know a bit about you as a writer, let's talk about you as a person. What is your favorite dessert?

Pretty much anything with chocolate. 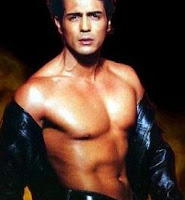 Ooh, chocolate is my weakness. I'm trying to lose some baby weight from my one year old, and chocolate is always my downfall. My hubby doesn't help. He always brings chocolates, which is probably one of the things that attracted me most to him. What do you find most attractive in a man?


If his name is Arjun Rampal.

Ah, two important qualities. And of course, it always helps to be Arjun. lol. Anything else you'd like to share?


My love for Arjun Rampal? It's kind of embarrassing, but there you have it. From Rampal to Bollywood movies. Wow. Talk about writing inspiration.


I know how much you love Arjun Rampal (in fact, readers can visit Carolyn's very own Arjun Rampal fan page.)Thank you for visiting Stockings and Stays, and sharing your love of such a hot hottie with us.

Carolyn Jewel was born on a moonless night. That darkness was seared into her soul and she became an award winning author of historical and paranormal romance. She has a very dusty car and a Master’s degree in English that proves useful at the oddest times. An avid fan of fine chocolate, finer heroines, Bollywood films, and heroism in all forms, she has three cats and a dog. Also a son. One of the cats is his.