Today, our visitor is Jillian Stone, a wonderful debut author of dark Victorian novels with a fantastic and original voice. Her debut novel, An Affair With Mr Kennedy, comes out January 31st 2012 and is available for pre-order on Amazon. Please help me welcome her.


I'd love to find out a bit about you as a writer. When did you decide you wanted to be a writer?

I have always been a storyteller and have been fortunate to work in the creative arts my whole life. In 2005, I experienced the loss of three deaths in my family. If anything jolts you into getting on with the work you are meant to do in life, it is the realization that we are here on the planet for a brief moment in time––so best get your stories told!

I can understand that drive to get a manuscript complete and polished. After that was done, how long did it take you to publish your first novel?

About three years. In the year I was marketing the AN AFFAIR WITH MR. KENNEDY manuscript, I wrote another novel, THE SEDUCTION OF PHAETON BLACK, a paranormal, steampunky story about an eccentric occult detective who lives in a basement flat below a brothel. On a layover in the Dallas airport on the way to RWA Nationals in 2010, I received "the call" from Kensington Brava editor, Audrey LaFehr, offering a contract for Phaeton! Oddly enough, my first book offer came before I had an agent or had won the Golden Heart for AN AFFAIR WITH MR. KENNEDY. Such a strange business!

That does sound pretty crazy. Now that we know a bit about your writing, let me ask some fun questions.
What is your favorite dessert?
A coconut cream cupcake from Zov's Bakery!

Ooh, that sounds yummy! Speaking of yummy, let's move to a subject near and dear to all romance writers (and readers) hearts. Men.
What most attracts you about a man?
His mind and his sense of humor. I look forward to the day when men return the compliment!

Just to give thanks to all the many wonderful editors and writers (April Dawn included) who have helped mentor me through the process of becoming an author. Jillian Stone was born a storyteller. A skill that got her into considerable trouble as a youth until she solved the problem by becoming an advertising creative. And the career did seem to suit her as she won many national ad awards including the Clio and the New York Art Director’s Club Gold. What more could she ask for? Create her own worlds? Become goddess of her own universe? Yes! So, she began to write fiction. Her Victorian Romantic Suspense novel AN AFFAIR WITH MR. KENNEDY won the 2010 Golden Heart and sold to Pocket Books. Her sexy, supernatural Steampunk novel, THE SEDUCTION OF PHAETON BLACK, won the 2010 Romance Through The Ages Erotica category and sold to Kensington Brava. Jillian lives in California and is currently working on the next adventure for both series.

An Affair With Mr. Kennedy 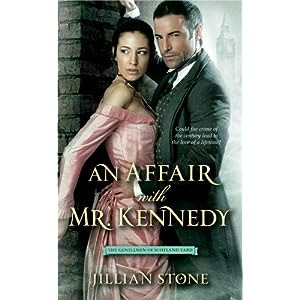 London, 1887. Part stoic gentleman, part fearless     Yard man, Zeno “Zak” Kennedy is an enigma of the first order. For years, the memory of a deadly bombing at King’s Cross has haunted the brilliant Scotland Yard detective. His investigation has zeroed in on a ring of aristocratic rebels whose
bloody campaign for Irish revolution is terrorizing the city. When he discovers one of the treacherous lords is acquainted with his free-spirited new tenant, Cassandra St. Cloud, his inquiry pulls him unexpectedly close to the heart of the conspiracy and into the arms of a most intriguing lady.
And Cassie is no Victorian prude. An Impressionist painter with very modern ideas about life and love, she is eager for a romantic escapade that is daring and discreet. She sets her sights on her dour but handsome landlord, but after she learns their meeting was not purely accidental, she hardly has a chance to forgive her lover before their passionate affair catapults them both into a perilous adventure.

We're having a holiday blog hop, so be sure to come back Dec 16-23 and comment on the blog hop post to have a chance to win an Author Signed, Advanced Reader Copy of this book. And one grand prize will be given away for one lucky commenter from the whole blog hop. A Nook Color. So be sure to check it out.This contest has concluded.
Posted by Unknown at 7:00 AM