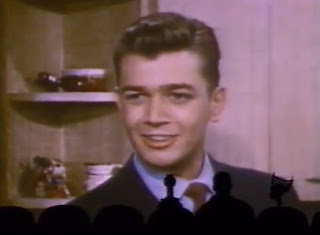 It's been a while since I've posted a personal writing post, so I figured now was a good time. I also wanted to discuss what we can learn from the movies, so I'm going to spend a few posts discussing what I've learned from television and movies I've watched recently.

I occasionally watch a show with my husband called Mystery Science Theater 3000 (MST3K). It's a funny show that riffs old movies and shorts (you know, the kind shown in health class.) While watching a short lately (called A Young Man's Fancy) I decided to look up a slang term used by the mother. When I did, I realized there was more to the short than the MST3K episode showed. I'd like to share what this episode taught me about writing characters and how one little action or scene can change your outlook on the characters.

The story is about a young girl, Judy, who is boy crazy. When her brother brings home a college buddy, Alexander Phipps, who is "Serious and studious minded," she isn't interested. But when he shows up with dimples and a strong jaw, all that changes. She's gaga for him. She tries to invite him swimming and uses all her teen wiles to tempt him, but he has a mushroom seminar to attend. Then her mother comes up with the idea Judy should make him dinner, which will, of course, make him fall in love with her and forget all about the seminar.
Judy tricks Alex into coming in to talk to her about electrical devices and time theory while they wait for dinner. After the fine meal, Alex can think of nothing more than going out dancing with Judy.

It's a sweet, though sexist and electrical-device-focused, little love story. Because she likes him so much, when she gets him, we're cheering. 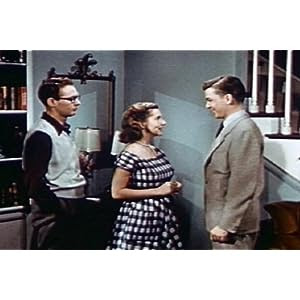 When watching the original, there are two short added scenes. Right after she tries to tempt him to swim, there's a scene where she's in the living room with Alex, and she asks him to put on some music. She's ready to dance, but he puts on Beethoven. Our dear Judy is naturally disappointed, and makes a square with her fingers, then sits with a magazine and slaps at the pages, rolling her eyes and saying, "Oh, this is my favorite song."
Alex laughs, then we go to a scene where she's asking her mother if she can go to a dance with another boy because Alex is an intellectual bore. Since Judy has already agreed to go to the mushroom seminar with Alex, her mother says she has to go to the seminar. Then we go to a scene where Judy is visiting a friend and talking about how much of a loser Alex is while they do laundry, and this leads into the scene about her mother having the idea for Judy to make him dinner.

With the new scenes, the feel of the character is entirely changed. Instead of rooting for Judy while Alex talks to her about the electric devices, the audience is imagining her boredom. And at the end, when he chooses to forget the lecture to go dancing with her, it seems less like he is choosing her than that he's just changing the venue. It seems like less of a win, and she seems less worthy of the win. The audience winds up wondering how long the two will stay together, instead of imagining a lasting romance.

A little thing can change a whole story. Even something as small as a word can make a good scene turn ugly. For instance, I recall reading a blog from a historical romance novelist who was talking about a back-list novel she'd put out. Her original story apparently had a forced seduction that was more force than seduction, a common trope for older romances. Since times have changed, she wanted to update the story and alter the rape scene. When she re-released it, readers were complaining that the hero raped the heroine. She couldn't figure out why, until she discovered a single reference toward the end of the book. A friend of the hero censures him for raping the heroine. So the actual love scene, and everything that came after, changed because of the one reference.

If you're interested in watching the MST3K and unedited Jam Handy version, you can find them both with Google. So tell me, has a character ever done something that made you completely change your mind about them?