Farewell to the Wet Nurse

Sometimes when doing research, I come across something that brings historical life into very tangible reality for me. When I was researching pudding caps (a post for another day) I came across this image, Farewell To The Wet Nurse, which did just that.
It was common for wet nurses to raise the children of noble women, at least until they weaned, and sometimes for longer. Since child mortality was so high, during the 18th century, there are stories of wet nurses exposing the baby and keeping the money paid to nurse the child. Babies were left swaddled too long and sometimes even tied to a peg on the wall, according to Society: a brief introduction by Ian Robertson. One gentleman wrote a letter to his wife during her vacation, telling her that he had removed their ten month old son from the care of the nurse because she'd broken his leg, and hidden it for weeks.
However, say things went well. Your child happily lived with a wet nurse who cared for him as she should. You might end up with a scene like the one we have here. 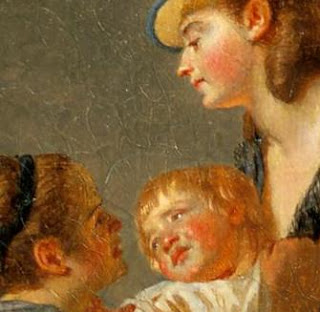 From a distance, this  appears to be a sweet farewell, with whispered goodbyes between mother and nurse. However, when we see the close up, the horror of the situation is clear. Even this scenario brought misery. The poor attached child must look at the wet nurse as mother, after a year or more nursing at her breast. the poor baby, and the wet nurse herself, are having a hard time saying goodbye.
I'm just thankful I live now, where I can raise my beautiful babies myself, with the means to keep them safe and the desire to keep them happy.

Feel free to leave a comment. If you want to, you can share the practice that most shocked you about 18th century living.