The winner of the bloghop grand prize is...

Congrats to Yadira on winning the Nook color grand prize!

And a happy new year to all.

The Thursday News - A Unique Solution

LINCOLN, RUTLAND & STAMFORD MERCURY
October 8, 1790
All persons are hereby cautioned against trusting Mary WALL, wife of John WALL, Blacksmith of Somerby in the County of Lincoln, as he will not be answerable for any debts she may contract - Also all persons are desired not to pay her any bills on my account from the date hereof. November 20, 1790.


LINCOLN, RUTLAND & STAMFORD MERCURY
17th June 1796
A Caution: Whereas, Elizabeth KIRK, Wife of me, Thomas KIRK of Bicker in the County of Lincoln, Farmer, prompted by an Evil Disposition, without any Provocation, Absconded from me on or about the 13th Day of January 1796, and has not since returned Home: Now I do hereby give Notice, that I will not pay or discharge any Debts that she may have entered into since she left me, or which she may hereafter contract. Witness my hand, Thomas KIRK, Bicker, 1st June 1796.
Posted by Unknown at 7:00 AM No comments:

The winner of the bloghop is Wanda F. Congratulations, you won the signed copy. Look for my email so I can get your winnings to you.
Thanks to everyone who commented or stopped by, and please keep an eye on my blog. I'll post when I have more information on the winner of the nook color.

For Christmas, I grabbed a Christmas book. I know it breaks the rule, but what the heck, it's Christmas.

"Ain't a bleedin' bedamned room t'be had in all a bleedin' Lun'nun, guv!"

LINCOLN, RUTLAND & STAMFORD MERCURY
11th June 1790
Marriage: A few days ago was married at Waddington near this city of Lincoln, William GAD aged 79 to Mary GAD of the same age and of the same place. What is extraordinary there was at tea in the evening, the bridegroom, the bride, their fathers (sic), four brothers, two sisters, two uncles, two aunts, one kinsman and one kinswoman: and altogether but six persons whose ages amounted to 416 years, and all of one name.


LINCOLN, RUTLAND & STAMFORD MERCURY
8th October 1790
Marriage: On Thursday last was married at Donington, Richard NICHOLS, (commonly called ´Saucy Nichols´) aged 71 to Ann DIXON aged 22. The good old man, hoping to avoid the ridicule of the multitude, led his Bride elect along a bye lane to the Church.
Posted by Unknown at 7:00 AM No comments:

Contest has ended - Win a Nook Color or a signed Book - An Affair Wih Mr. Kennedy

This holiday season, we are having a blog hop!

Hop to this blog or any of the others for contests and giveaways, which each blog will have. You can enter on each blog to win books and swag, just check out the links in the footer of the blogsite.


All entrants from every blog will also be entered to win the Grand Prize for the blog hop, a Nook Color.


Just sign up to follow the blog and leave a comment about the book or the blog and you will be entered to win a Nook Color, and my personal giveaway, an Author Signed Advanced Reader Copy of... 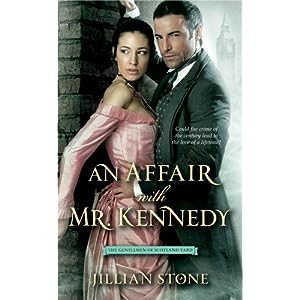 An Affair with Mr. Kennedy from an amazing debut author, Jillian Stone. Check out her interview here.

London, 1887. Part stoic gentleman, part fearless Yard man, Zeno “Zak” Kennedy is an enigma of the first order. For years, the memory of a deadly bombing at King’s Cross has haunted the brilliant Scotland Yard detective. His investigation has zeroed in on a ring of aristocratic rebels whose bloody campaign for Irish revolution is terrorizing the city. When he discovers one of the treacherous lords is acquainted with his free-spirited new tenant, Cassandra St. Cloud, his inquiry pulls him unexpectedly close to the heart of the conspiracy—and into the arms of a most intriguing lady. Cassie is no Victorian prude. An impressionist painter with very modern ideas about life and love, she is eager for a romantic escapade that is daring and discreet. She sets her sights on her dour but handsome landlord, but after she learns their meeting was not purely accidental, she hardly has a chance to forgive her lover before their passionate affair catapults them both into a perilous adventure.

Do not forget to add your email address if you don't have a blogger profile with an email listed. International readers are welcome to enter the book giveaway.

Oh, and be sure to check out my Free Read for Christmas at Passionate Critters blog, where Passionate writers come together to talk romance. We're each posting a short story for Christmas for the 12 days before Christmas.
Posted by Unknown at 10:00 PM 34 comments:

LINCOLN, RUTLAND & STAMFORD MERCURY
April 16, 1790
Amongst the fortunate proprietors of Lottery tickets this season, is Mr MARRIS of Winterton in this county, who a few days ago was agreeably surprised at being informed, the ticket of which he held a Half Share, had drawn a £20,000 Prize. He then immediately set off for London where he has had the pleasure to receive £10,000 on demand, as being his share of the Prize.
Posted by Unknown at 7:00 AM 1 comment:

I find that, for me, writing the 3rd quarter of a book is the most time intensive, and, in some ways, difficult part of writing a story. I'm so close to the fun ending that I want to jump ahead and write it, but I know I can't do that. Of course, that's where I've ended up this Christmas time, so I have plenty of excuses to put off writing the difficult section.
I think, for those of us who write, the times when we are finding it the hardest to write, are the times we should push hardest to do it. Not just because it's the difference between a dabbler and a pro, but because it is so easy to procrastinate and fall into the writer's 'no man's land' where we write the beginning of a million stories, but never finish any.
So, for any writers experiencing the same thing I am, commit with me. we will write every day of the holiday season, even if we only write three words. (Taking Christmas day off is okay.)
All right, I'm off to write. Good luck to everyone out there who's struggling to finish a scene or chapter. And don't worry, it will get easier as the page count progresses.
Posted by Unknown at 7:00 AM 2 comments:


Esme McCallan paced restlessly in the solicitor's office in Staple Inn. From beyond the closed door she could hear the hushed voices and footsteps of clients coming to meet with other attorneys.

Do you recognize the sentence? Want to share your opening sentence? Comment below.Click to find out the answer.

This lovely young girl has flowers in her tight coiffure, and a large bow tied around her throat. Her gown is fairly plain, aside from the pink ribbons cross her stomacher, but she is wearing a lovely shawl. The bird perched on her finger is likely to show her to better advantage. Paintings often included things of interest to the person being painted to relay a bit of their personality (at least the personality they wanted to put forth).

What do you think of her fashion sense?
Posted by Unknown at 7:00 AM No comments:

LINCOLN, RUTLAND & STAMFORD MERCURY
January 29, 1790
A curious boxing match took place a few days ago at Waddington near Lincoln between two females of that village, Susanna LOCKER and Mary FARMERY. They both laid claim to the affections of a young man; this produced a challenge from the latter to fight for the prize, which was accepted. Proper sidesmen were chosen and every matter conducted in form. After several count-down blows on each side, the battle ended in favour of Mary FARMERY.
Posted by Unknown at 7:00 AM No comments:

No one who had ever seen Catherine Morland in her infancy would have supposed her born to be an heroine.

What do you think? Know what it is? Want to share the opening sentence of the book near you? Feel free to comment. Click here to see the answer.

Our love letter recipient wears her hair in a high fashion with a pink
ribbon around her ruffled cap.  Her necklace, possibly a locket, ties
at the back of her neck.
Her watteau gown flows loose down her back, and ends in flounces
at the elbows. Of course, she has the biggest accessory for a lady of
means, a puffy dog, which seems to be about to take out the painter.

What do you think of her style?
Posted by Unknown at 7:00 AM No comments:

IPSWICH JOURNAL
February 14, 1784
There is now living in the parish of Systen (Syston), near Grantham, a family remarkable for the following kindred, viz:- A grandfather 70 years of age, and near 20 stone in weight, and lately married to his fifth wife, now a grandmother of about 20 years of age; also a grand-daughter, 2 husbands, 2 wives, 2 mothers, one son and 4 daughters, 2 brothers, 3 sisters and 1 uncle, 2 aunts, a niece and two cousins; yet notwithstanding their consanguinity and affinity, this family consists of only six persons
Posted by Unknown at 7:00 AM No comments: